Steven Pasquale of “Rescue Me” has been forged as a recurring visitor star in Peacock’s upcoming crime-drama series “The Lacking,” the streamer declared on Tuesday.

The sequence, which is primarily based on the bestselling novel “The Missing File” by Israeli author Dror A. Mishani, is made by David E. Kelley, alongside Keshet Studios and Common Tv. Barry Levinson has been tapped to immediate various episodes and govt make the collection.

“The Missing” follows Detective Avraham (Jeff Wilbusch), an NYPD detective with the 77th precinct who is left to question his own humanity when a seemingly regime investigation turns upside down. 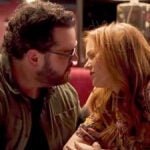 Curran is repped by Link Leisure, Ground breaking Artists, and Scott Marshall Associates in the Uk.

The studios are Keshet Studios, the U.S. generation arm of world-wide content producer and distributor Keshet Global, and Universal Tv, which is a division of Universal Studios Group